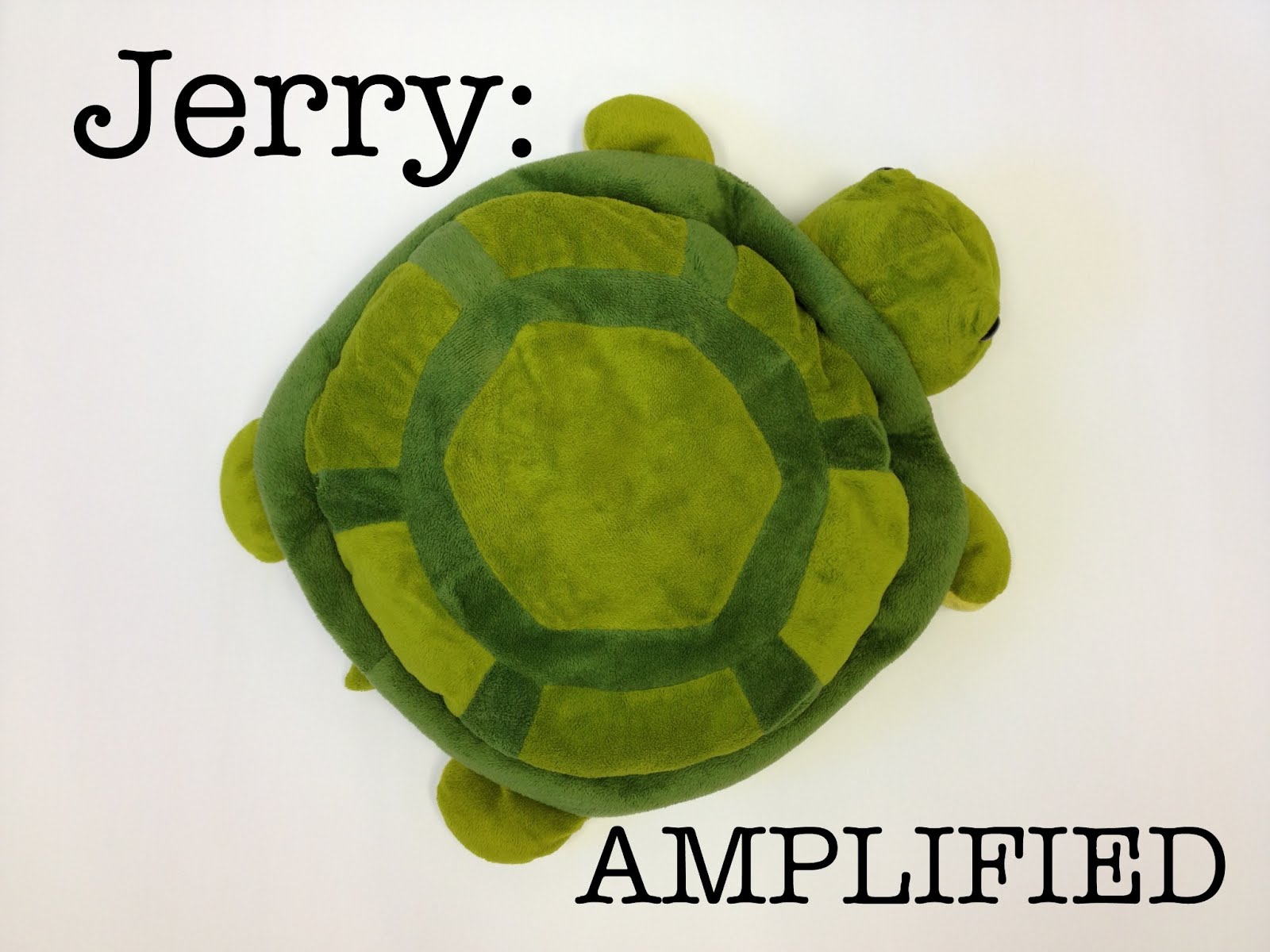 “Learning is amplified by the amount of people who are collaborating, participating, communicating and creating. The learning is NOT about the technology tools, but what students can DO with them to learn in new ways. The learning is about authentic tasks, that allow students to contribute in a individualized and personalized manner to make them realize that their work matters in the real world.”

~Silvia Tolisano from the Langwitches blog

I had a wonderful modern learning experience this past school year Skyping into a first grade class in Jacksonville, Florida. This first grade class is learning geography (as well as global perspectives!) through an activity that they call “Mystery Skyping.” The teachers connect with someone via Skype somewhere in the world. That person Skypes in and the students get to ask questions to discover where in the world that person is. I was so excited to participate and be one of the “Mystery Skypers!”

The teachers captured some images and blogged about the day I Skyped in. Click here to read it.

During my chat with the students, I was introduced to Jerry, their class stuffed animal. Jerry had traveled home with each student over the course of the year and each student recorded Jerry’s experiences in Jerry’s Journal. They wrote about what they did with Jerry and shared pictures of their time with him. I asked the students if Jerry had ever traveled outside of Florida.

I invited Jerry to come visit me in Buffalo and offered to write in Jerry’s journal as well. We also decided to do a Skype session live from Niagara Falls with Jerry, extending this lesson in geography. The teachers in this class, Pamela Lewis (@PamelaLewis1388) and Marissa Tolisano (@Marissa2309) blogged, tweeted, and stayed plugged in during the entire process!

Jerry Back At School 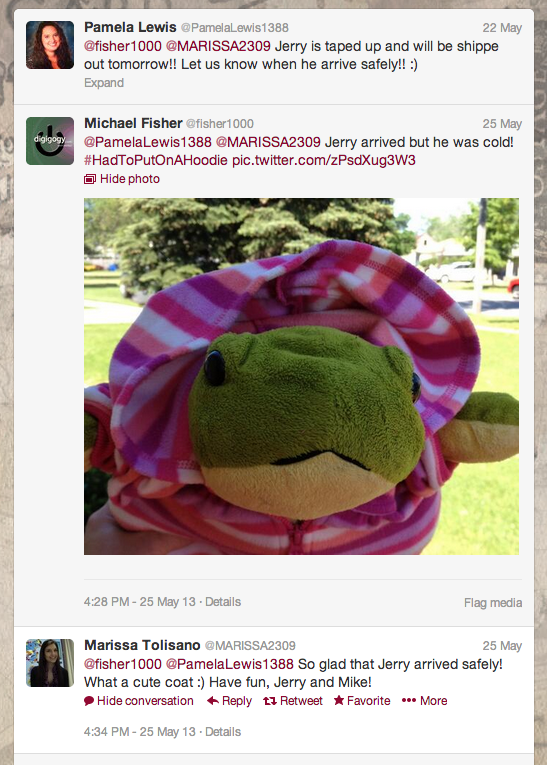 When I sent Jerry back to school, I sent him back with interactive journal entries. Rather than just pasting in a few pictures and writing a few anecdotal notes, I decided to go a little higher tech.

I took a picture of Jerry with my phone, uploaded it to Dropbox and used the image to create a Concrete Poem with an original limerick: 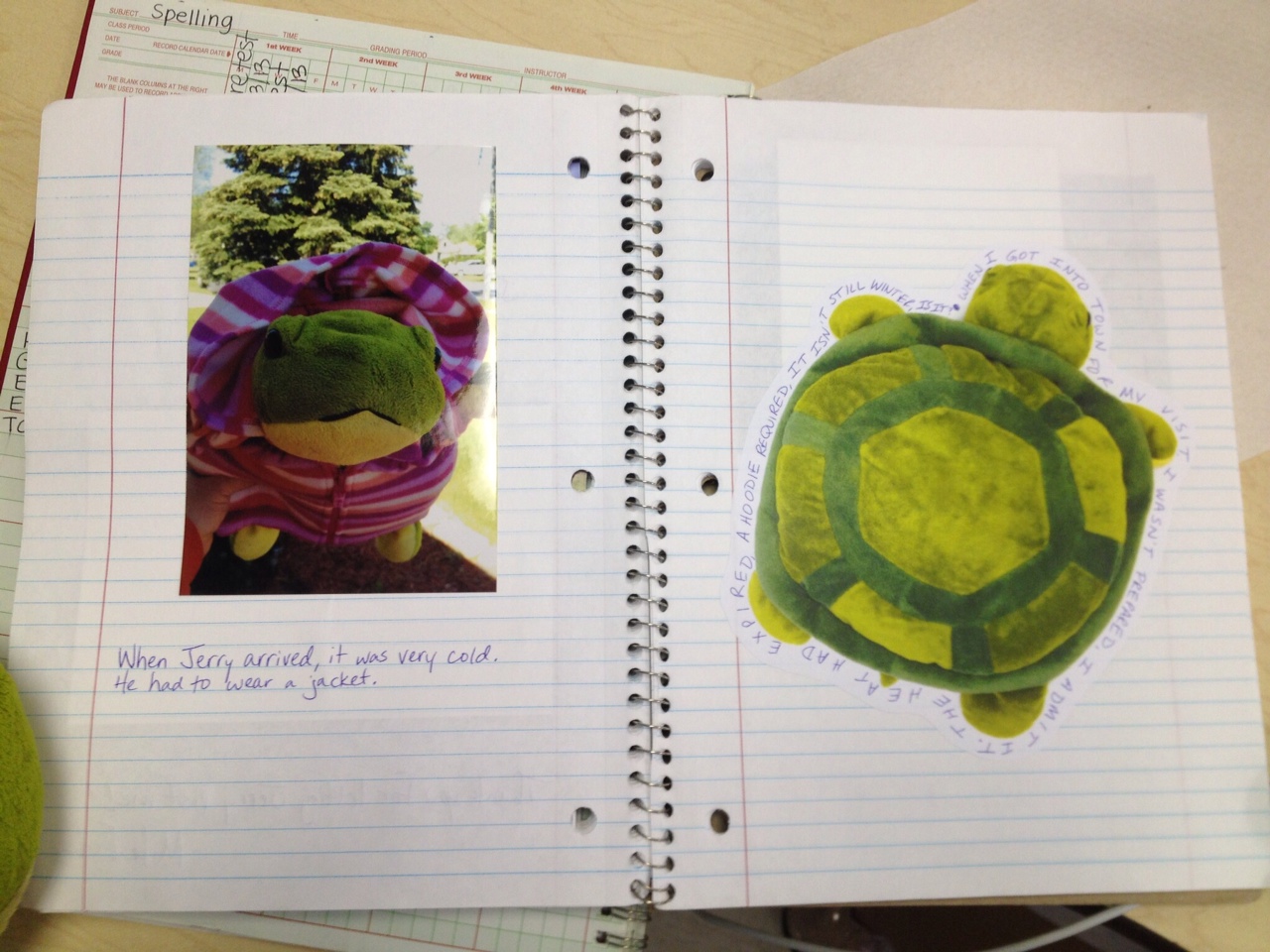 In case it’s hard to read, the limerick is:

When I got into town for my visit;

I wasn’t prepared, I admit it.

The heat had expired,

It isn’t still Winter, is it?

I wrote another poem and a rap song and uploaded the content to Youtube. I created QR codes for the content, printed them, and glued them into the journal along with the pictures that I took. While these students had already been introduced to QR codes long ago by their forward thinking modern teachers, I wanted the students to have to access the new content in a modern way.

Here are the videos that the QR codes directed to:

The teachers here, in amplifying their classroom to open it up to global opportunities, have created multiple levels of engagement and learning for their students. Amplification essentially means that the learning is moving beyond the classroom, the way sound waves move from their source. Amplification means that learning is broadcast to a global audience, allowing for larger and more authentic experiences through different types of publishing, feedback, refining, relearning, and continual improvements. Amplification creates opportunities for global discourse and learning that make the learning louder and more impactful than it would be otherwise.

This amplification of Jerry, through blogs, Skype sessions, tweets, even the involvement of the US Mail, had several educational impacts:

The activity also allowed me to jump out of my own comfort zone and teach class, over Skype, at a gigantic waterfall. It was the equivalent of “Educational Skydiving.” It was a thrill to take a risk on something like this, literally from the edge of a gaping chasm. When it was over, I felt like a million bucks! (Side note: a group of 50 or so tourists were crowded around me and watched me from beginning to end. Over half of the tourists were visiting from China and one of them, who was bilingual, translated everything I said to the group. How’s that for GLOBAL IMPACT!?!)

This learning moment was the highlight of my academic year. I was so impressed with what these teachers are doing in their classroom and so impressed with these students and their voracious consumption of knowledge.

Now that the summer is here, I hope that those that are reading this will think about their own curriculum design and perhaps use this as a launching pad for their own authentic upgrades as they plan for the next round of students in the fall.

*Author’s Note: I am going out on a limb here and sharing my rapping skills. My wife would like you to know that she tried to talk me out of it, especially since I’m writing this for a national audience, but I am throwing caution to the wind. Motivating and engaging kids to learn is way more important to me than me being embarrassed, though many of you have already witnessed “Karaoke Mike” at multiple venues around the country. If it makes you cringe, it’s okay. It had the same effect on me. 😉